Reaping the rewards of TeamCard 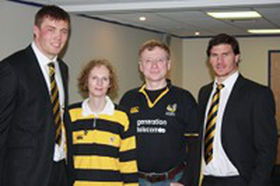 For years, TeamCard holders have been reaping the benefits of reward, earning points with all their online purchases. Since January, we’ve been sweetening the pot, offering cardholders the chance to win an additional 1000 points each month.Simply make a purchase through Team Street, using your card or fob, and you are automatically entered to win a free 1000 points, worth £10 when redeemed at the users’ club or organisation.

The competition is aimed to work as a small incentive to remind cardholders to shop through ‘Team Street’, TeamCard’s official shopping portal, when shopping online. The promotion, which was first introduced to cardholders at the end of 2010, is having the desired effect, with an increasing number of cardholders utilising the rewards benefits.

The promotion has already had an additional advantage to cardholders we didn’t anticipate. TeamCard client clubs have embraced the idea fully and joined in the congratulations. In the case of our first winner, London Wasps fan Mrs. Eleanor O’Connor, her club turned her £10 windfall into a full on experience day, arranging for Eleanor to meet with the official club photographer and have her photo taken with Wasps centre, Ben Jacobs and giant lock, James Cannon.

In the lead-up to 2011, TeamCard also ran a promotion aimed at our social network users, offering a points award incentive of 2010 TeamCard points to one randomly selected cardholder, once a threshold of 2010 fans joined our TeamCard Facebook page. The goal was reached within hours of the promotion being announced and lucky Bradford Bulls supporter, Deborah Sunter, was awarded the prize. Deborah redeemed her points in time to purchase a Bradford Bulls replica shirt for her husband for Christmas.

TeamCard continues to work closely with the cardholders and the clubs which they support, to bring them the best possible rewards, helping to ‘lower the cost of their passion’.